Tonight I was shredding a stack of old papers when my shredder started making a clunking noise every few seconds.  Curious, I just let it go and it got louder and louder until the grinders stopped spinning.  The motor was still going, faster than ever actually, but the grinders sat still.

Unable to accept that I broke it, I decided to take it apart and have a look.  After a few minutes I had the cover off and nothing jumped out as being disconnected or busted.   So I dug further, this time taking the gear box housing apart.  It didn’t take long to see the problem – a busted gear tooth 😦 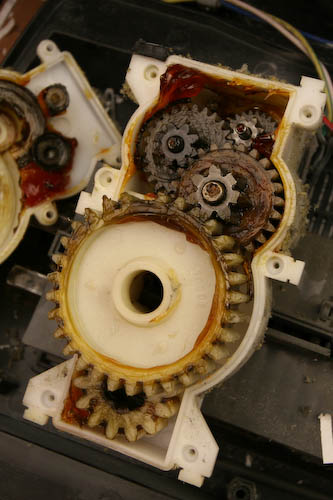 The missing gear tooth was found lodged in another gear.  I ran to the store to get some Krazy Glue and reattached the broken piece.  After putting it all back together, it worked!  For about 3 minutes.  The glue and already-mangled tooth couldn’t handle the pressure.  I suspect it didn’t help that they have a metal gear turning a plastic one.

I looked it up and found that it’s out of warranty by a couple years, so I instead emailed their support begging for a replacement gear (and attached a nice photo showing the gear I need).  I honestly doubt that I’ll be able to get one, but it’s worth a shot.  It wasn’t a cheapie.

Anyone from Fellowes out there? 😉

One thought on “Shredder Woes”