I’ve got a couple of little stories today, about some cats on attack!

A couple days ago we had the house opened up to enjoy the beautiful weather.  It was roughly 11:30pm, and I was sitting here at my desk working on the computer.  Ana and David were sound asleep, and I was starting to get a little tired.

All of a sudden, World War III breaks out in the adjacent room – I hear cats attacking each other, and I don’t mean play-fighting.  I mean all-out, screaming at the top of their lungs, I’m going to kill you attacking.  I jump up to find Ana’s cat Neo mid-air and tackling my cat Dozer in the open window.  I then hear a third cat, out on the porch – I’ll refer to him as Mr. Instigator.  I have to throw our cats apart, then sit between them growling/hissing/screaming at each other in the hallway.  Ana wakes up and runs downstairs, at which point I tell her to grab Dozer and get him out of there.  Neo keeps trying to get past me to attack him, but I was able to keep him at bay.

Completely insane, I’ve NEVER had them act like that.  Neo growled anytime anyone got near him for hours.  Dozer was freaked out and a little scared for the same amount of time.  I kept him in our room over night with the door closed to prevent any further damage, but he wanted out bad.  It got to the point where around 3:30am I had to take and walk him around the house to show him everything was a-OK.  Neo was sure to keep his eye on him the entire time.

Upon further inspection of Dozer, he had Mr. Instigator’s white fur in his claw and a bit of a busted up claw on his back foot.  Pretty impressive considering there was a screen (which he looks to have ripped through a little bit) between him and Mr. Instigator.

Later in the morning, I got the two cats together and they’re all fine – as if nothing at all happened.  BUT, I had the window open, with both cats sitting my desk when I spotted Mr. Instigator outside again (along with a sidekick, and a dead mouse in his mouth).  Luckily I was able to close the windows and shades before our cats spotted them again. GEEZ!

And on a completely unvicious, unrelated incident.  David got a little scratch when playing with a family cat (Peanut, for those in the know..) yesterday.  He just doesn’t quite know yet when the cats are done playing. 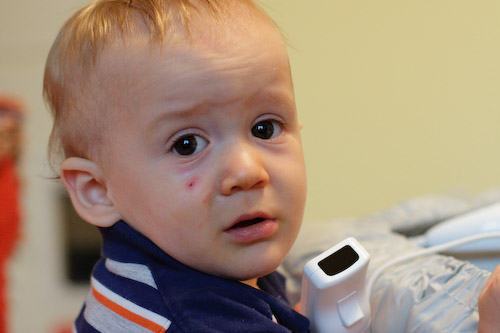