In preparation for installing the antennas, we did a little research to figure out how hard it might be to aim them. Google Earth provided us the information needed to calculate the vertical angles the antennas should be sitting at. Below is a map of the two houses: 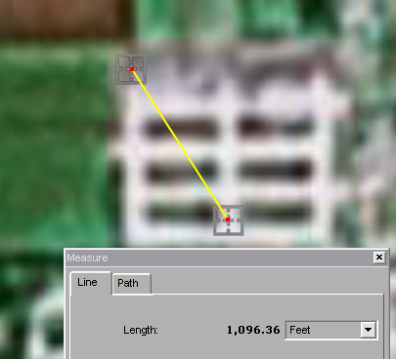 We started installation on a Sunday afternoon, after a trip to Lowe’s to get some supplies (caulk, caulk gun, cable duct, etc.). Attaching the mount and antenna to the back side of Jay’s house proved to be as simple as we expected, all said it was probably done in under an hour or so. Not that that was the last time we were on the ladder at his antenna, however…

We moved on to my house, shoving the extension laddar into my car’s trunk: 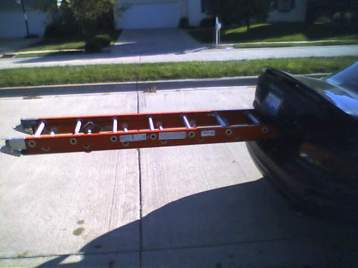 Arriving at my house, we took a look at where we wanted to mount the antenna. We even tried setting up the ladder. I even started to climb it. It was maybe 10′ too short to be able to comfortably work on.

On to newly-devised Plan B: mount it on TOP of my chimney (we have a gas fireplace, the chimney is fake and is nothing more than a huge box running up the side of the house for aesthetics). The mounting hardware that came with the antenna was designed to be attached to a wall, so we needed to build something to hold this thing. At this point I don’t recall if we stopped for the day or continued working… not that it matters I suppose.

Lowe’s had just what we needed: angle iron, lag bolts, and washers. We sat on the floor at the store for a while as we constructed a prototype of sorts while a few employees walked by. Not every day you see a couple guys sitting on the floor of a store playing with the metal strips as if they were Legos.. Shortly after arriving home, we ended up with this concoction: 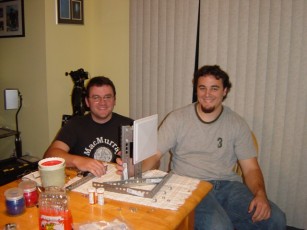 So far, Ana has made no mention that the antenna won’t be hidden at the back of the house as was first explained to her. Neat 🙂